In 1945, my father joined Jack Teagarden’s big band, where he played tenor in the reed section and clarinet in the “Dixieland Band.” On clarinet, he stayed in the low register – this almost all the time. The sound was rich and resonant. He favored long blue notes, punctuated by arpeggios.

I think the sound was more important in those days.

Jack particularly liked that low-register clarinet. It reminded him of clarinetist Gilbert O’Shaughnessy. Jack had played with Gilbert in San Antonio when they were very young.“Gilbert was the best in the world,” Jack would say, thus informing his bold-exaggerating-to-make-a-point statement about Bix being the best artist in history.

“I named my son Gilbert Teagarden for Gilbert O’Shaughnessy,” Jack said. In later years, Gilbert O’Shaughnessy came in a few times to sit in at the Landing. He was an interesting clarinet player, and he did stay in the low register most of the time. Clearly, however, he was not the best in the world.

Being with Teagarden was heady stuff for my father. He and Jack became running mates.They went at the whiskey. Going around after hours and sitting in was a big part of this. For Jack, the music never stopped. My father said that a couple of times at a “black and tan,” they ran into and sat in with Louis Armstrong. 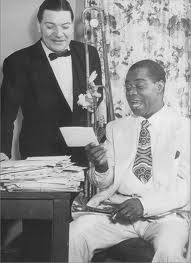 Jack, who sometimes didn’t go to bed at all, often took Benzedrine and kept going. Life was too much fun to waste it on sleeping. My father tried to keep up – said that Jack had an extra gland. Toward night’s end, when all the music was finally slowing down, Jack would wash out his trombone in the bathtub and have fun even with this, fooling around, showing off, with things like how he could pump water with the slide. Then he would oil the slide with Jerris Hair Oil. “World’s best slide oil,” he would say.

Not everyone used Benzedrine, but many did. In those days, my father said, you could go to the drug store and buy Benzedrine inhalers. Then, if you could not get Benzedrine, you could break open the plastic inhaler, drop the Benzedrine filament in a Coca Cola and drink the Coke.

At daylight, Jack, up on Benzedrine, would go out to the band bus and begin to take the engine apart. Nothing would be wrong with the engine, but Jack loved mechanical things. Then at about noon, he would begin to practice for a couple of hours. The trombone was always out of its case and ready. 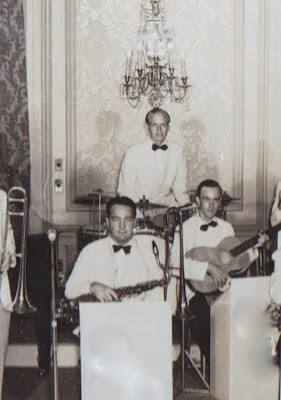 On tour with a different band, and traveling in a 1938 Ford, my father ground away at the one-nighters. The distances could be vast. Fighting it out, they often drove against the night, pushing hard to make it.

On one night in Oklahoma, the two-lane blacktop road stretched straight and long. The driver struggled to stay awake. “Gimme one of those ‘bennies,’” he said. Soon he was wide awake.They rolled on. My father dozed in the back seat.

Sometimes they called the Benzedrine pills “California Turn-Arounds,” meaning you could take one, drive to California and turn around and drive back!

Suddenly, the car lurched, almost turned over, skidded, rotated and plowed sideways into the black dirt of a muddy field. 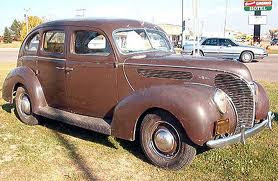 “Holy crap, man! What happened?” They all turned to the driver.

“It was that train!” he said. “We just barely missed it! Came out of nowhere. We just almost hit it!”

The driver kept on. “Thank God! Just barely missed it!” he said over and over.

They struggled out to the road. The car was completely mired down. Dawn slowly came on. An occasional car came by, but no one wanted to stop for five musicians in muddy tuxedos.

Still shaken, a couple of them began to walk up and down. There were no railroad tracks anywhere!

The Teagarden Band toured on the bus. The driver took no Benzedrine. Jack carried a lathe and rode in the very back where he turned his own mouthpieces. “Let me fix your mouthpiece,” he would say to unsuspecting trumpet players, and out would come the lathe. Mostly, he ruined the mouthpieces.

Jack was always inventing things. He built a huge electric fan to go at one side of the band and keep things cooler in the un-air conditioned summer heat. When the fan was first turned on, it blew all the music off 18 music stands – blew it all the way to the other side of the ballroom and jumbled up the parts.

One of Jack’s inventions was a big trunk – like a steamer trunk – that doubled as a music stand. The trunk stood on end – opened with its hard sides toward the audience. There was a music rack on the top of the thing. The inside of the trunk, which faced the band, contained Jack’s dinner jackets, a bit of music, his mutes, and all kinds of other stuff.

After dances the band often hit the road. Jack wore a carbide miner’s hat to light up his tinkering. He always said that carbide was the most perfect method of illumination ever devised.

Jack was a nut about steam engines. Many musicians are fascinated by trains, especially steam trains, but for Jack it was steam cars. He said to me, “Some fellows I know took an old Stanley all the way down the Pan American highway, from Alaska to the bottom of South America, and the cost of the oil to fire the boiler was only $17.00 – for the whole trip! For years, I’ve been storing my steam car in a garage in Fort Worth. There’s a guy there that loves it just as much as I do. He dusts it off every day – fires the boiler every week – keeps it in perfect condition. It’s been there for years. I owed him for some past storage. Last month I phoned him and gave the car to him. ‘It’s yours,’ I said. He got so excited I thought he was going to faint. I’m busy with the band. I don’t have time for steam touring.”

By the time I came along, in his last days, it seemed that Jack was depressed. Among a handful of the greatest jazz players of all time, stardom had slipped through his fingers. When Bob Crosby’s band was being organized, the members wanted Jack as front man. This would have made Jack a huge Swing Era star, for in the late 1930s the Crosby band was the second most popular, right behind Benny Goodman.

But in 1935, Jack had signed a contract with Paul Whiteman who refused to release him. So, the Crosby band musicians sought out Bing’s younger brother, Bob.

Many years later when I was following Jack’s band, I stood out of sight and off to the side, and quietly watched Jack Teagarden leave one of the concerts. He slowly dragged his square case by its end handle. Now portly and tired with his head down, he looked like a very sad man.

But the music will buoy you up. When he was up there, with that trombone in his hand, the swing of the thing, and that sound coming from his trombone, made Jack Teagarden higher in the 1960s than the Benzedrine had in the 1940s.