What is Funny, Anyway?

In 1956, I was 17. I made my first trip to New York that year. Jazz was seriously on the place. Teagarden at the Round Table, Gene Krupa at the Metropole, Red Allen was there too in another band. I went to Jimmy Ryan’s every night for there the great Wilbur de Paris band was at its zenith. And what a band it was.

All these things will be chased around in future blogs. But wait!

While I was in New York in 1956, one of the movie houses was running W.C. Fields movies- a week-long festival. I went there and saw a different Fields film every day. The classics I saw included “It’s a Gift,” which is often spoken of as Fields’ masterpiece.

I left New York with a better understanding of what a jazz band should be and with my concept changed forever about what was and what was not funny.

The more modern comics I mostly prefer to skip, enjoying so much more the works of Chaplin, Laurel & Hardy, Ben Turpin, Fields and a few others. I have suggested to my wife Tina that if I am ever confined to a bed, she will almost certainly cause me to become well by setting me up to watch the old comedy movies. “It’s a Gift,” is my favorite movie of all time.

But there is another more modern movie that I would like to have included: “Young Frankenstein” by Mel Brooks. This movie is for me! If you haven’t seen it, I recommend a quick trip to Blockbuster video or Netflix.

Recently, my wife, Tina, and I went to see “Young Frankenstein – the Musical,” a road show touring from what I assume was a hugely successful run on Broadway.

Here in San Antonio, these things almost always play at the Majestic Theatre and the Majestic Theatre is one of a cluster of classic movie palaces across the USA. Just to walk into the place and see it without a play is worth a lot. But, of course, we were there for all the bells and whistles.

Okay, here is my verdict: This “Young Frankenstein” was about the most fun I ever had at a play. I thought it was, as Louis would quip, “a gasser!”

If you have, as we used to say, “even a Chinaman’s chance” you should grab it and pay the bread and see this thing fast.

Of course, the famous climax of “Young Frankenstein” is the monster in top hat, white tie, tails and walking stick dancing and singing “Puttin’ on the Ritz,” all out of meter.

At intermission I peered into the orchestra pit and saw several of our San Antonio aces resting their chops having wailed out the first half of the tricky New York score. One was John Carroll, who also is the principal trumpet player in the San Antonio Symphony. Also looking up from the floor of the pit, was Ron Wilkins, trombonist and jazz virtuoso the likes of which cannot be found anywhere, even New York (no kidding). Ron used to play a lot at the Landing and he still blows a set at the Landing on rare occasions, but usually he is a big shot over at the University of Texas.

Back to what is funny. Check out the amazing tickling scene from Laurel and Hardy’s “Way Out West.”

“Give me that deed to the gold mine,” a woman says to Stan Laurel.

Stan shakes his head and puts the deed in his shirt.

“Give me that deed or else,” she says, approaching slowly with clenched fists.

The woman makes a dive for the deed and an insane tickling scene ensues – a perfectly choreographed wrestling match full of Stan's insane, high-pitched laughter and convulsing.

The scene is crazy, random and hilarious.

Here’s what Stan Laurel thought about comedy: “A friend once asked me what comedy was. That floored me. What is comedy? I don't know. Does anybody? Can you define it? All I know is that I learned how to get laughs, and that's all I know about it. You have to learn what people will laugh at, then proceed accordingly,” he said.

Okay, this is the end of Le Blog Hot for today, but listen, and seriously, try to see that road show. I posted videos of Stan Laurel being tickled and "Puttin' on the Ritz" following this blog for your enjoyment. 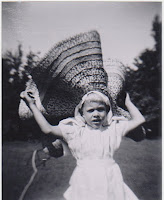 “What’s this?” you say. And, well…let me explain for when I was a little girl…

When my kids were little, I would often begin this way, saying things like, “Well, when I was a little girl we did this or that” – made homemade ice cream on Sunday afternoons or went barefoot all summer or built tree houses or whatever it was….And the kids would say, “Wait a minute, Dad, you weren’t a little girl!”

“Mommie,” they would call out, “was he a little girl?”

And she would answer, “That’s what he says.”

They would stand there, hands on hips and shake their heads, “You were not a little girl, Daddy.”

“Okay, okay, come upstairs with me and I’ll show you a photo.”

“Who is that?” they would say, pointing to one image after another.

“Well, that one is of my grandfather and that one is my mother and my sister and those are some of my cousins.”

“But here, kids, look at this photo. As you can see, I was a little girl.”

They stare, for before their eyes is their own father with a big girl’s hat and a blouse and skirt and even girl’s shoes. The kids now stare with genuine wonder.

After about a minute of silence, one of them finally asks “Were you really a little girl, or were you just dressed up like a girl?”

Mostly, they would decide that I was really a little boy and I was just dressed up like a little girl.

My delightful daughter Blanquita (whose nickname is “Beeky”) is now 34 with three small children of her own. She laughs a lot about this. For a year or so when she was four, she really bought it and said, “Oh, yes, my Daddy was a little girl. I’ve seen a picture.”

The other kids mostly decided that I was really a little boy and I was just dressed up like a little girl. Eventually, I confessed and explained all about it.

“It was my sister,” I’d start out. She was seven when I was born and she helped in taking care of me when I was a baby. It was fun for her. She had a real live doll. She would dress me and pick me up and put me in the baby carriage and take me for rides, at least until she got tired of it.

When I was two, I was stricken with a terrible fever. Lucke, our old come-to-the-house-with his-little-black-bag doctor, came over. Dr. Lucke determined that I had polio! Of course, everybody flipped. Everybody, that is, except my sister, who was nine years old by that time.

Dr. Lucke was wily. He had read a lot about President Franklin Roosevelt and the president’s struggle with polio.

In the Roosevelt case, they massaged his legs a lot. Dr. Lucke knew that polio, being a virus, should not be stimulated by massage. He said stimulation of any kind caused it to spread, become more active and aggressive.

“Don’t even let that baby stand on his legs. Doctor’s orders.”

Some of the time when they could not be right there, my sister was assigned to wait and watch.

And this my sister did, , holding me, rocking me, changing me just like the grown-ups did.

It all came out amazingly well in the end. I had only the slightest residual effect of the polio: the muscles of one eye were weakened so that I needed glasses. I could see with 20/20 vision, but looked cross-eyed. I wore glasses and took eye exercise therapy three times a week and I almost completely was able to correct this problem. When I was 25, I attempted to join the military. It came to the big white board with the black letters in rows, and I hit a snag.

“But,” I said, “I always passed the Texas Driver’s License eye test.”

The sergeant quipped, “The Department of Public Safety doesn’t want you to hurt anyone and we want you to kill a lot of people – different test. Got it?”

So I went on back to civilian life.

And now let me back you up in the blog. I completely recovered from polio (except for the eye thing that only counts if you try to go into the army). In fact, I have been a natural athlete all my life and used to win the 100 yard dash once in a while. For years I ran for the sheer joy of it and even for transportation.

Here’s the dressing in drag part. The polio had been over for a couple of years, but my sister was still dressing me up like a doll. I had not gotten old enough to protest. In act, I have been very close to my sister for as long as I can remember.

So along there at one point when I was about four years old, I was mostly ready for anything she wanted.

Halloween was on and as some of you cats will remember, no one worried about anything weird happening to their children as they went around the neighborhood.

“Well, well, what have we here?” They typically held a large plate of homemade tollhouse cookies – held just high enough to be out of range.

“And what are you, little boy?

“And what about you? What are you – a Spanish senorita or something?”