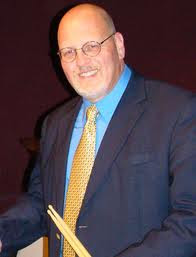 “You really prefer Shaw to Goodman?” he quizzes me. He knows in advance that he has a fight on his hands. 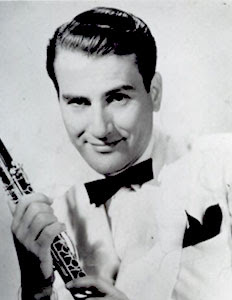 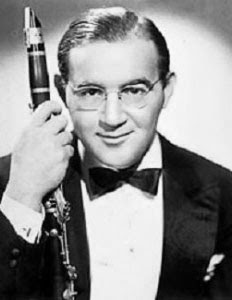 Let me tell you, I think that these arguments, so common among jazz nuts, are mostly hot air. Hal prefers the Coca Cola. I’ll have a Pepsi, please! Most of the time, that’s how silly this stuff is. But, for old time’s sake, we go at it.

Shaw vs. Goodman! Of the two, Shaw thrills me more.

“No comparison!” I say, “Shaw wins in all the ways I can measure.”

Hal fires back, “How could you measure so that you prefer Shaw?” He lists numbers of Benny’s early recordings. 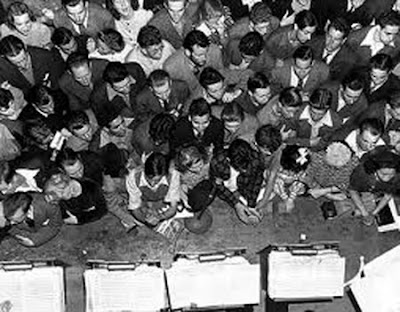 The Shaw vs. Goodman battle was first waged by the jazz weirdoes during the late 1930s. A tidal wave of jazz, newly re-packaged as “Swing” had young Americans by their throats. A performance by one band or another would ignite passions never known before in American music. The jazz camps lined up. The excitement about Shaw and Goodman caused one of the biggest battles. Mainly Benny won out. He was the most popular of all swing-era figures and generally he eclipsed all other clarinetists. 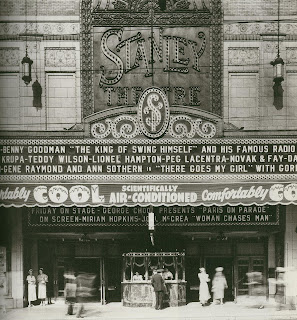 However, Shaw began to challenge Goodman’s preeminence, and between the two of them, a high water mark of jazz clarinet performance was set. 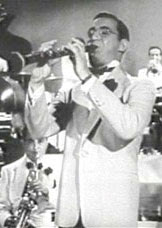 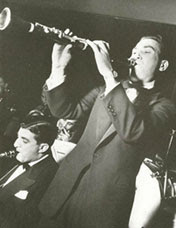 For my money, no one ever played the clarinet more beautifully than Artie Shaw. As much as I admire Benny, here are reasons I admire Shaw more:

1) Shaw’s tone is a little darker – I think it is more mellow and richer and more interesting than Benny’s. In a few words, Shaw’s tone is unique, recognizable and gorgeous. 2.) Shaw is more careful about picking out the most interesting notes. This may be small potatoes, but I don’t think there are quite as many surprises in Benny’s playing.

When you listen to Shaw, think of Bix and listen that way. Shaw’s sound is special like Bix’s and he doesn’t waste many notes. He is like Bix in telling the story. Somehow the Bix influence is in there. Maybe it is accidental. But I suspect that Shaw had been very impressed by Bix. Both Beiderbecke and Shaw had special tones and both tended to find unexpected patterns.

Shaw had heard Bix play at his peak. He was amazed by the sound. “The whole horn vibrated,” he said.

A few years later Shaw roomed with Bix for a while.

After another 60 years, an aging Shaw attended the Bix Beiderbecke Jazz Festival at Davenport, Iowa. He discovered that the Beiderbecke home where Bix was born and had grown up was becoming dilapidated and the roof had failed. Shaw began to yell about the condition of the house.

In the end, the whole place was well restored. This was a big deal. To the hardcore devotee, the Beiderbecke house is a Mecca. 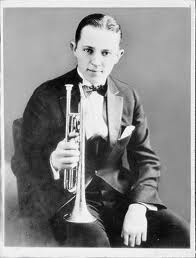 I suggest that when you listen to Shaw, listen to the similarities to Bix.

Shaw possessed and often displayed more technique than Bix. But don’t let that confuse any point about their similarities.

Goodman, also considered a kind of genius by many, swung just as hard. His playing was always perfect, flawless.

But Shaw is where a special, individual art lies. Listen to Shaw that way and see what you think.

Great though it is, I do not recommend another round of “Begin the Beguine.” Rather get into Shaw in depth. There is a huge wealth of recorded material, and Shaw, who retired early, was always at the top of his form.

“So if you’re so smart,” Hal asks, “who are your fingers-on-one-hand favorite jazz musicians?” You know the bit − whose records do you take with you to a desert island, when there can only be five artists?

I am ready for him. “Here you go,” I say. And I toss them off, for I have played this game for a lifetime: “Armstrong, Beiderbecke, Bessie Smith, Artie Shaw, and there is a 10-way tie for 5th and last place.”

“Why are you worrying about my 5th place, anyway? We’re talking about Goodman and Shaw. You go figure out your own 5th place choices.” This is the way these jazz arguments have been going ever since Buddy Bolden, having finished with the waltzes and schottisches, came on with a slow, grinding blues.

There are some strong similarities in the Shaw/Goodman comparison. 1.) Both were unique and brilliant musicians. 2.) They were eccentric in the extreme. 3.) They were driven by their egos and their talents and the clear rivalry that was between them. 4.) They took great advantage of the rising tide of the swing era to carry the form to a high art.

If you can find it, try the double CD set of the Artie Shaw “At the Blue Room, At the Café Rouge” air checks. To my ear, big band swing just does not get any better. Shaw’s hands are all over this stuff. He wrote or directed the writing of the arrangements. He set standards for solo quality. The result: everyone in the band absorbs much of Shaw’s taste, and solo notes are not wasted. Ensemble precision is amazing. The rhythm section, with young Buddy Rich on drums, is as good as it gets. 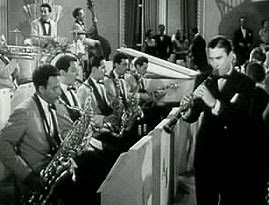 If you do find this CD, I suggest that you experiment with turning down the high frequency response. In the transfer from LP to CD, the audio has become a little too edgy to be faithful. But I think you’ll like it – really like it!

I enjoy this size band too: four rhythm, three trumpets, two trombones, four saxophones, plus Shaw (14 pieces in all). Benny’s band had the same instrumentation.

I never cared as much for the later swing bands – often with nine brass, five reeds and usually only three rhythm.

If you hear a swing band today it is usually extra large and more about volume than it is about swing. Often you will see 20 mikes on a band already loud enough to peel the paint. Rock starts to creep in on some numbers.

Or, sometimes there is the other extreme − moo cow, slavish imitations of Glenn Miller.

Of course it would not be impossible to create a swinging band like Shaw’s. But it would take an obsessed genius like Shaw to drive it. And the market is not there. To realize full potential, a band like this must actually work every night for hundreds of nights. 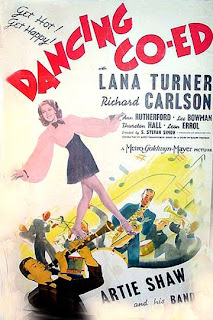 The other night I saw a movie, “Dancing Co-ed,” starring Lana Turner and Artie Shaw. The movie is terrible, but Shaw plays a lot, and his playing is magnificent. You can find all this on your computer. I can’t − I am computer challenged. But you can find it, you lucky dogs!