Gib O'Shaughnessy loved music from the start.  It was in his blood.  His father led the annual St. Patrick's Day Parade while dancing Irish jigs.  (But his father couldn't carry a tune in a bucket, according to Gib's sister Katy).  Gib also did the jigs, along with his younger brother Emmett.  Sometimes the three performed as a trio.  Gib wanted to play music, so he learned to play the clarinet at age 16.  This led to his career as a musician and a life filled with music he shared with everyone he met.

Gib was the seventh of eight children of Gibert Ryan O'Shaughnessy and Mary Hansberry.  Gilbert Ryan was straight from Ireland, arriving in the U.S.A. around 1878; Mary was another generation removed from Ireland, her folks having come through Mobile, Alabama.  The O'Shaughnessys were the typical struggling family in San Antonio, Texas where Gib was born.

The music bug bit Gib hard.  Jazz music was in its beginning stages and it intrigued Gib when he heard it.  He recalled in later life that he was fascinated by the blues and wanted to play nothing else.  But he just loved music anyway and wanted to play it even if it meant leaving home and suffering the disapproval of his parents to do it.  His first real musical job was in 1922 when he went to Tampico, Mexico with a small group of musicians.  When they returned to Texas he stayed in Tampico.  There he met "Ham" Crawford, who played in Larry Conley's orchestra.  (Conley later became a songwriter and was the lyricist for "A Cottage For Sale," published in 1929).  Gib joined the orchestra and stayed with it after Crawford took over from Conley.  This group returned to the states and played throughout East Texas and Arkansas.

Gib joined Peck's Bad Boys around April, 1923 at Peck Kelley's invitation.  They were playing at the Garden of Tokio Ballroom in Galveston.  Peck Kelley was an influential jazz pianist in Houston who rarely ventured away from his home city.  His band was one of the best of the early jazz bands.  Jack Teagarden (trombone) was already a member of Peck's Bad Boys.  He and Gib may have known each other in San Antonio in 1921 0r 1922 because they both played in local spots before Jack moved to Houston.  (Jack had to leave San Antonio in a hurry because he was a witness to a shooting at the place he was playing; he was afraid the shooters were after him to silence him).

Gib and Jack became good friends while they were playing together.  They were close in age and experience (Jack was born Aug. 20, 1905) and both had family in San Antonio (Jack in later years).  The friendship was so close that one of Jack's sons was named after Gib.  Gilbert Teagarden was the son of Jack and Dee Ora Teagarden.  Dee Ora lived in McQueeney, Texas until her death at age 97 in 2001.

Gib was later with Marin's Southern Trumpeters, which included Teagarden and Terry Shand (piano).  They went on a four-months tour during the summer of 1924 that ended in Mexico City.  They returned to San Antonio to play at the Winter Garden on October 8.  It was at this engagement that Gib was asked by Jimmie Maloney to play in his orchestra, known as "Jimmie's Joys."  But Gib decided to stay with the Trumpeters for a gig in Ohio.  That turned into no job, so they returned to Texas and Gib decided to join the Joys.  This was probably October 18, 1924. 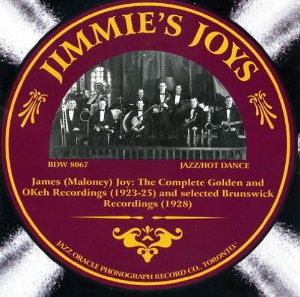 Jimmie's Joys had its start in Austin, Texas in 1921 and played at Galveston's Joyland Park during the summer of 1921.  Then the band performed around Texas and across the South.  The name Jimmie's Joys became so well known that Maloney legally changed his name to Jimmy Joy in 1927.  In 1924 the band was hired as the house band at the St. Anthony Hotel in San Antonio.  While there the band broadcast on WOAI twice a week.  The Joys started out as a hot jazz band with no formal arranger.  All band members contributed to head arrangements, learned from the sheet music and records and committed to memory.  during their time at the St. Anthony they performed the old jazz standards but moved closer to straight dance music.

In October 1924 Gib recorded with the Joys in Dallas for OKeh Records.  By this time he had learned to play the alto and tenor saxophone and played them on recordings.  In April 1925 the band was given time off from the hotel to travel to Kansas City for a recording session.  They made numerous one-night playing stops along the way.  In Kansas City they recorded on May 13 and 14.  Gib had several clarinet and alto solos.  Additional recordings were made in Dallas in October 1925.  On Feb. 20, 1926 the Joys closed their 19-month engagement at the St. Anthony.  They opened March 1 in he Crystal Ballroom of the new 18-story Baker Hotel in Dallas.  The Baker opened its swank Peacock Terrace Roof Garden on May 31 with the Joys providing music.

The Joys broadcast live from the Baker on WFAA on Monday, Thursday and Saturday at 2:30 and 6:30 p.m.  Included inn the broadcast was the vocal trio "Pick, Shovel and Spade" composed of band members Gib, Clyde "Fooley" Austin and Earl Hatch.  The band left the Baker in November, went on tour, then returned to the Baker until Dec. 28, 1926.

Next was the Brown Hotel in Louisville, Kentucky in January.  They stayed six weeks and broke attendance records.  The band returned to Texas for a tour, then back to the Brown and a performance as the official Kentucky Derby Orchestra, which they did for three consecutive seasons.  There were more tours, including a month at Peachtree Gardens in Atlanta, Georgia.  In the Fall of 1927 they returned to the Brown.

There was a recording session in March 1928 in Chicago for Brunswick Records.  Another session took place in May.  Next was an engagement at the Muehlebach Hotel in Kansas City until Oct. 7.  Beginning in 1930 other long engagements took place at hotels in St. Louis, Oklahoma City, Denver, St. Paul, Pittsburgh, Memphis, Milwaukee, Shreveport, Philadelphia and Chicago.

The Joys left for San Francisco in March 1932 to play at the Bal Tabarin Night Club.  In July they made their way back east.  One of the stops was at Sylvan Beach near Houston.  At this point Gib decided to leave professional music.  While at the Bal Tabarin he had married Marion Hayden of San Francisco.  She didn't care too much for the music world, so they returned to the West Coast where Gib began working in his father-in-law's butcher shop.  After a year or so in this work Gib went to work for Standard Oil in California, eventually becoming a sales representative.  He retired from the company in 1977.

But Gig didn't retire from music; it was too much a part of him.  After leaving the Joys he played most of the time in a non-professional status whenever the opportunity arose.  He played at social events, fund raisers, family gatherings and other times when people wanted music.  He became an entertainer also, telling stories and jokes to go with the music.  This suited his outgoing and cheerful personality.  He especially did an impersonation of musician Ted Lewis, whose big songs included "Me and My Shadow."  Gib went exclusively to his clarinet for his later years of music-making.  He also did paid gigs from time to time.  One gig in later years was a cruise to Hawail where he was asked to join a group of young musicians to provide music for the cruise.  Gib said he had a great time on that job.

Gib and Marion always lived in the San Francisco area.  Their later addresses were in Belmont and Burlingame.  They had no children.  Marion died in 1975.  Gib died Feb. 10, 1989 of Legionnaires Disease in San Mateo.  They are buried at Holy Cross Cemetery, Colma, California.

Here is a summary of Gib's musical career: