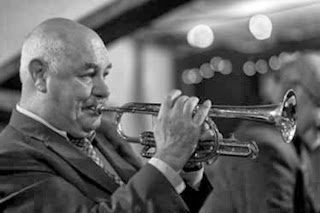 The iconic Bob Barnard, now 80, is a jazz master with no equal.  He climbed to this pinnacle early in his career and has held this exalted position for over 50 years.

Considering his preeminence, it may seem odd that with the exception of Australian intellectuals and niche jazz fans around the world, Bob is not well known.  And even though Bob's lack of world fame tends to derive mostly from those with holes in their blue jeans, it still lingers across populations in general.

Beauty is in the eye of the beholder, they say.  Or, "If this Aussie is really what you claim, Sir, I would know everything about him, down to the color of his underwear, and I've never heard of him!"

Contradictions such as this abound in the music business, and some of us chafe.  Ever since the 1950s, almost all popular music has been completely dominated by lyrics.  The few instrumentalists who have become well-known have tended to excel at displays of pyrotechnics or other gimmicks.

Bob is an older, white Australian who mostly stays home, does not sing, jump around or wildly entertain.  He just goes about his craft, pouring out magnificent pieces of art every time he puts the trumpet to his lips.  He bears the badge of the great players: an instantly recognizable personal style.

With a player like Bob, that personal sound is like a human voice.  Once you know the voice you know it forever.  And the most treasured of our jazz players have had this quality.  Further, within his personal style, Bob can play anything he can think, and he thinks of great things.

When we speak of the geniuses our music has produced during its 100-year history, almost all have found these "voices" by a great deal of working in the trenches, studying other great players and then heading for the woodshed and the bandstand.  Also, I notice that this kind of personal development has often happened in the provinces.

Bob Barnard began playing cornet in his parents' family band.  His older brother Len was the drummer, and Bob and Len went through a lot of their professional lives together.  Particularly in their early days, I think Len often pointed the way to young Bob.  And Len knew the depths of the music.

The brothers went jazz crazy.  That explosion sent them rocketing off into the jazz world.  Keenly intelligent, full of fun and wit, while at the same time deeply serious about their music, they would do anything, go anywhere for a gig.

Within a few years they were touring up and back all over Australia as "Len Barnard's Famous Jazz Band!"  There was work.  Jazz and dancing in the Post War Era flourished in Australia just as it was declining in the USA.

After a few years Bob moved from Melbourne to Sydney, began playing in studios, joined Graeme Bell, polished his art and emerged as a unique jazz figure whose brilliantly constructed improvised solos stand with the greatest of all time.

Copying no one, Bob was at first influenced by Louis Armstrong classics.  Later his playing took on some of the lyricism of cornetist Bobby Hackett.  The result contains the drive and abandon of Louis and the weaving up and down patterns and the golden rich cornet tone of Hackett.

This is overlaid by all the rest of it: the rest of Bob's own style, the voice of Bob's horn, so influenced by this long life as an Australian jazz man, his relationships with his family, friends, fans and voices from the past.

Bob Barnard, the musician, the artist is a world treasure.  I admire him beyond all the musicians I know.  It has been one of the great honors of my life to have toured and performed with him, recorded with him and to count him as a friend.